'There are few topics in a modern liberal curriculum that should be compulsory but maybe Michael Rosen's Centrally Heated Knickers should be one. It is a fantastic show at any level and even though aimed at younger children, mums and dads and expectant grandparents were grinning throughout. The theme is science approached through Michael's wonderfully wordy poems. I watched the young faces squirming in the delights of his playfulness as he drew us into the magic of new knowledge.

But so much more than science - the live music interacting with the audience, the dance expressing the mystery and wonder and Michael including maths too as he counted out loud to stay in time! Fabulous show.

the show was fantastic – excellent, engaged performances and a great message. Didn't insult anyone's intelligence, and something I know parents would love as much as their kids.

Director of the UCL Ear Institute

Huffing and puffing through rehearsals... 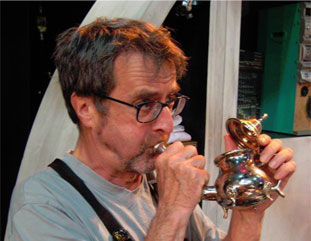 “Fantastic show, very original and ingenius! Lots of fun, children loved it and at the end, one of them asked
'When can we see that again?'”